Adopt Me! Wiki
Register
Don't have an account?
Sign In
Advertisement
in: Pets, Events, Lunar New Year (2022),
and 7 more

The Lunar White Tiger is a limited ultra-rare pet which was released in Adopt Me! alongside the Lunar New Year (2022) event on February 3, 2022. Players could purchase a Lunar Tiger Box for

The Lunar White Tiger has a white body with black stripes on its back, head, face, tail, and behind its ears. It also has a pink nose, black beady eyes, and whiskers.

These are the tricks the Lunar White Tiger learns in order:

The Neon Lunar White Tiger glows a fluorescent pink color on the stripes on its back, face, behind its ears, and tail. 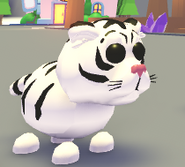 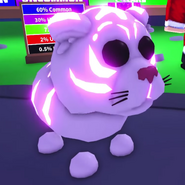