Adopt Me! Wiki
Register
Don't have an account?
Sign In
Advertisement
in: Pets, Safari Egg Pets, Ultra Rare,
and 5 more

The Lion has a yellow torso, tail, ears, paws, beady black eyes, a beige nose, and a brown mane wrapping around its head, neck, and surrounding the ears.

Here are the tricks the Lion learns in order:

In its Neon form, the Lion glows white on the insides of its ears, nose, paws, and the tip of its tail.

In its Mega Neon form, the Lion glows in the same areas as its Neon version, except that it cycles through the colors of the rainbow. 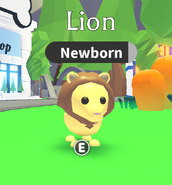