Adopt Me! Wiki
Register
Don't have an account?
Sign In
Advertisement
in: Potions, Food, Interactable,
and 8 more

The Levitation Potion is a limited ultra-rare potion in Adopt Me! that previously could be purchased at the Sky Castle for

995. It was removed with the Sky Castle’s renovation and it is now unobtainable unless through trading.

The Levitation Potion is stored in a bottle with a square-shaped base and a thinner rectangular neck. It is topped with a rectangular black cap. Players can visibly see indigo-colored liquid inside of the bottle.

As its name suggests, the Levitation Potion allows the player to float in the air with a simple jump. When the player is floating, they appear to have a cloud beneath them. Jumping again while afloat will allow you to fall to the ground and walk again. This effect will not go away unless the player resets or leaves the game. 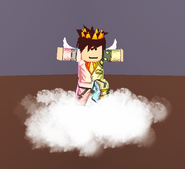 The cloud effect while a Levitation Potion is in-effect.

The Levitation Potion on display in the old Sky Castle.
Community content is available under CC-BY-SA unless otherwise noted.
Advertisement