Adopt Me! Wiki
Register
Don't have an account?
Sign In
Advertisement
in: Gamepass, Food, Interactable,
and 5 more

The Lemonade Stand is an ultra-rare toy added in an update on July 26, 2019 that can be obtained in the shop with

50, or through trading. It can be equipped in the toy section of the inventory.

The Lemonade Stand can be placed by selecting in it from the inventory. After it is selected, it will appear transparent and float in front of the player until the player places it down with the left mouse button (or by simply tapping the screen on mobile). Once placed down, the player can set up the lemonade stand by changing the price or taking it down and putting it back in their inventory. The Lemonade Stand gives the player the ability to sell Lemonade at a price ranging anywhere from

20, and it cannot go any lower or higher.

When setting up, the Lemonade Stand cannot be placed on a slope, in the air, or on an object. It will turn red if it is on one of these or for some other reason cannot be placed down. It is the cheaper variant of the Hotdog Stand, but it sells drinks instead of food.

A Lemonade Stand in a player's inventory. 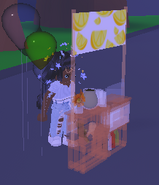 The Lemonade Stand before placing.
Community content is available under CC-BY-SA unless otherwise noted.
Advertisement