Adopt Me! Wiki
Register
Don't have an account?
Sign In
Advertisement
in: Pets, Robux, Interactable,
and 5 more

View source
watch 02:58
No Man's Sky Update - The Loop
Do you like this video?
Play Sound
Not to be confused with Kitsune Mask.

300 during the first 2 weeks of its release and the Cyber Sale.)

The Kitsune is a legendary pet in Adopt Me! that was released on July 10, 2020. It costs

600. It is currently available and can be bought in the Pet Shop along with the Panda, Sloth, Cerberus, Guardian Lion, Peacock, Red Squirrel, Winged Horse, and the Axolotl.

When the Kitsune was first released on July 10, 2020, not only was there a new pet, but there was also a 50% discount to every pet in the Pet Shop for the first two weeks of the Kitsune’s release. This was to encourage players to purchase the Kitsune, as well as some of the other Robux pets. On July 24, 2020, the discount came to an end and the prices went back to normal.

The Kitsune has a peach-colored body with three salmon-colored teardrop shaped marks on its forehead. The Kitsune has large peach colored ears with salmon colored insides. It also has a salmon, reddish-pink colored fluffy area around the neck. The tips of its seven tails, as well as its feet, are also colored reddish-pink. It also has two black beady eyes and a triangular-shaped black nose.

Listed below are the tricks the Kitsune learns in order:

The Neon Kitsune's ears, parts of its tails, chest, and feet glow light blue. Some of the tails glow so bright that their neon color resembles white during the day.

The Mega Neon Kitsune glows in the same areas as when made Neon, except that it cycles through the colors of the rainbow. 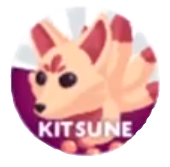 Adopt Me!'s announcement regarding the release of the Kitsune. 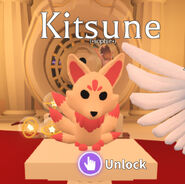 The Kitsune pet at the Pet Shop on the Pet Pedestal. 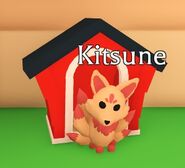 The Kitsune on display in the Pet Shop. 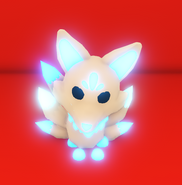 The Kitsune on Adopt Me!'s thumbnail for the Spring Sale! update.
Community content is available under CC-BY-SA unless otherwise noted.
Advertisement