The Kirin has a turquoise body with a lighter colored belly. It has two brown antlers, beady black eyes, a combination of yellow and orange on its mane, and a yellow tail. It also has orange eyebrows, dark teal ears with lighter teal on the inside, and brown feet.

Here are the tricks the Kirin learns in order:

The Neon Kirin glows light lime green on its mane, eyebrows, and fur while its antlers glow white.

The Mega Neon Kirin glows in the same areas as the Neon Kirin, except these areas cycle through the colors of the rainbow. 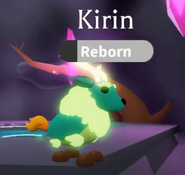