Adopt Me! Wiki
Register
Don't have an account?
Sign In
Advertisement
in: Pets, Legendary, Legendary Pets,
and 4 more

The King Bee is a legendary pet in Adopt Me!. It can be obtained by purchasing Honey for

The Bee adoption center is located in the Coffee Shop, where players can buy Honey to tame a Bee, as well as the food such as Coffee and Tea. Honey cannot be used anywhere else besides the Coffee Shop.

The King Bee has a round shaped black body with yellow stripes. It has a round black head, oval shaped yellow wings, small yellow antennae, yellow feet, and beady black eyes. The King Bee is slightly larger than the Bee. It also has a small and pointy yellow stinger.

Here are the tricks the King Bee learns in order:

The Neon version of the King Bee glows a brass yellow color on its antennae, stripes on its body, stinger, feet, and wings.

The Mega Neon version cycles through pink, magenta, white, blue, and purple on its antennae, stinger, stripes, feet, and wings. 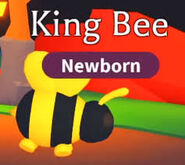