Adopt Me! Wiki
Register
Don't have an account?
Sign In
Advertisement
in: Pet Accessories, Common, Pets,
and 4 more

The Killer Whale Badge is a common pet accessory in Adopt Me! that was released as part of the World Oceans Day update. It was obtainable in the WDC (Whale and Dolphin Conservation) Pin Badges Board for free.

It was displayed on a wooden board along with the other WDC Pin Badges. A player can attain a maximum of one pin badges every hour. This pin, along with the other ocean badges, was released on June 8, 2021 and left on July 8, 2021. As it is now unavailable, it can only be obtained through trading.

The Killer Whale Badge features a decagon-shaped pin with a purple border and a photo of a Killer Whale's black and white-colored tail with light blue background with multiple curve lines that resemble a cartoon ocean waves. This pet accessory goes on the pet's chest.

The Killer Whale Badge on the wooden board in the Oceans Day Stand. 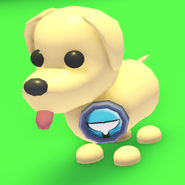 The Killer Whale Badge as seen on a Dog.
Community content is available under CC-BY-SA unless otherwise noted.
Advertisement