Adopt Me! Wiki
Register
Don't have an account?
Sign In
Advertisement
in: Pets, Eggs, Legendary Pets,
and 6 more

The Kangaroo is mostly brown with a light beige underbelly, and the insides of its ears are tan. In addition, the Kangaroo also has a pouch in the light beige area of the underbelly, which a joey comes out of when you unlock Trick 2. It has two beady black eyes and a black nose. The eyebrows on the Kangaroo are a slightly darker shade of brown than on its body for better visibility.

Here are the tricks the Kangaroo learns in order:

When made Neon, the Kangaroo's ears, nose, tail, and feet glow a pastel yellow color. 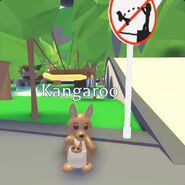 A baby Kangaroo inside the Kangaroo’s belly pouch, used for Trick 2. 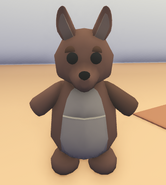 A Neon Kangaroo.
Community content is available under CC-BY-SA unless otherwise noted.
Advertisement