The Jungle Egg is a limited legendary egg in Adopt Me! that was released on August 31, 2019, replacing the Safari Egg, then was replaced by the Farm Egg on November 22, 2019. It costed

The Jungle Egg appears as a brown egg with twigs attached to the top and sides. Surrounding the egg on the bottom is a green vine with a few leaves growing out beneath it and on the sides.

The Jungle Egg has seven pets that can be hatched from it. They are the following: 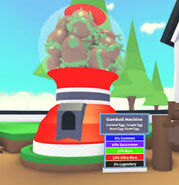 The Jungle Eggs in the Gumball Machine.