Adopt Me! Wiki
Register
Don't have an account?
Sign In
Advertisement
in: Vehicles, Legendary, Legendary Vehicles,
and 5 more

The Imagination Box is a legendary two-seater vehicle in Adopt Me! which was added to the game on March 25, 2021, as part of the new gifts rotation. It can be obtained from Small, Big, or Massive Gifts for

499 , and can also be obtained through trading.

The Imagination Box is a brown cardboard box, open on the top with two flaps protruding on either side. As well as a flap on the back, it has two large black, drawn-on circles which are meant to represent headlights and a bumper with a black paw drawn on it. The bumper is attached with duct tape. A cardboard outline in the front acts as the windshield. The inside of the box features two seats made out of cardboard material, both of which are also attached with duct tape.

The Imagination Box on the Gifts Display. 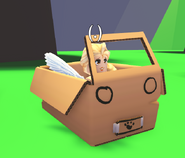 A player riding the Imagination Box. 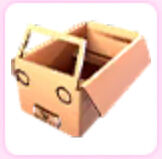 The Imagination Box as seen in a player’s inventory.
Community content is available under CC-BY-SA unless otherwise noted.
Advertisement