Adopt Me! Wiki
Register
Don't have an account?
Sign In
Advertisement
in: Pets, Christmas, Interactable,
and 10 more

The Ice Golem is a limited legendary pet in Adopt Me! that was added to the game in the Winter Holiday (2021) event. It could have been bought for

1,000. Since the event has ended, it can now only be obtained through trading.

The Ice Golem features a white, stacked pet with an animated shape near the bottom. Its arms, eyes, and other facial features resemble cyan ice shards. These decorative ice shards hover around its back. It also has a small blue snowflake in the center of its stomach and is surrounded by white smoke, forming a trail as it moves around.

These are the tricks the Ice Golem learns in order:

The Mega Neon Ice Golem glows in the same parts as the Neon Ice Golem, except it cycles through the colors of the rainbow. Its eyes remain fluorescent yellow, the color of its Neon form. 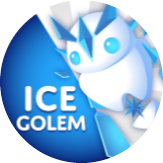 A teaser image of the Ice Golem. 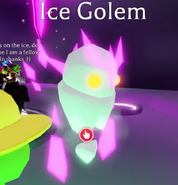