Adopt Me! Wiki
Register
Don't have an account?
Sign In
Advertisement
in: Vehicles, Legendary, Legendary Vehicles,
and 9 more

The Ice Cream Truck has the appearance of a typical American step-van, repurposed to sell Ice Cream.

The Ice Cream Truck has a bright pink and bright blue color palette, with pink going through the top and bottom side of the van, and a large blue line interrupting the pink paint scheme that goes through the driver compartment and extends to the bottom edge of the truck.

It has a large vanilla ice cream cone on the roof, which changes color when the player plays the Ice Cream Truck's tune. The roof also portrays four horns, two large and two smaller ones on either side, which produce musical notes when the music of the Ice Cream Truck is playing.

The inside of the truck features two seats, one on the front for the driver, and one in the back, between two freezers.

The Ice Cream Truck is a large vehicle that players use to earn a bit of extra money. It has two seats so another player or pet can sit in the vehicle.

For what it lacks in efficiency, it makes up with its unique ability to sell Ice Cream to players, much like the Hotdog Stand and Lemonade Stand. The owner of the truck gets to choose the price of the Ice Cream, however, the cost must be between

20. The username of its owner is displayed on the back of the truck, and the price of the Ice Cream is displayed on the front of the truck. The sign always changes to the price specified. The Ice Cream Truck also has a unique tune that can be played to alert players of its presence, much like a real ice cream truck but after using the music, the player will have to wait for a short while before playing it again. 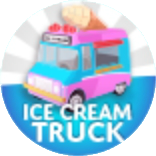 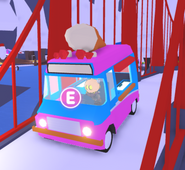 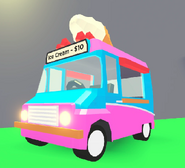