The Hydra is a three-headed serpent that has a blue body, beige underbelly, dark-blue gray paws, and black beady eyes. It also has beige and blue frills on top of its head, all the way down to its tail.

Here are the tricks the Hydra learns in order:

The Neon Hydra glows a bright cyan blue on its fins/spikes, underbelly, and nostrils.

The Mega Neon glows in the same areas as the Neon Hydra, except that it goes through the colors of the rainbow. 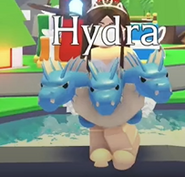 A player holding a Hydra. 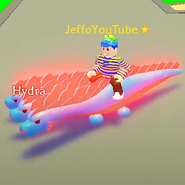