Achieved if you reach 140 Stars in the Star Rewards, Trading

The Human Bubble is a single-seated rare vehicle in Adopt Me! that is awarded to players after reaching 140 stars (45 days) in the Star Rewards program. It can also be obtained via trading. However, when first released, it couldn't be traded and could only have been obtained by maintaining the login streak.

The Human Bubble is a transparent sphere with several lines around its exterior. The lines are probably there to help distinguish when the bubble is moving or stationary. The player can be seen sitting in the Human Bubble, despite it having no seats or any sort of apparent way of propulsion.

In terms of handling, the Human Bubble is essentially a skin of a Monocycle and behaves as such. It is incredibly fast with unforgiving handling. Crashing into objects at a fast enough speed can cause the Human Bubble to bounce off of them, preserving its speed and momentum. Additionally, you can go into the water with it.

The Human Bubble as seen in the Star Rewards list 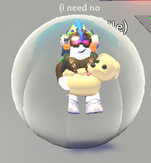 A player driving the Human Bubble whilst holding a Dog

Human bubble in a player's inventory 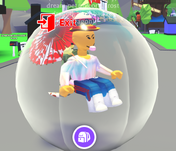 Human In A Human Bubble
Add a photo to this gallery
Retrieved from "https://adoptme.fandom.com/wiki/Human_Bubble?oldid=129562"
Community content is available under CC-BY-SA unless otherwise noted.