Adopt Me! Wiki
Register
Don't have an account?
Sign In
Advertisement
in: Vehicles, Legendary, Legendary Vehicles,
and 7 more

Hovers slightly above the ground.

The Hovercar is a legendary vehicle in Adopt Me! that was added to the game on March 18, 2021 as part of the new gifts rotation. It cost

499 through its respective gifts. However, it is no longer obtainable and can only be obtained through trading.

The Hovercar is a large, futuristic-looking boat-like vehicle with a primarily white-colored body; it has a black secondary color surrounding its interior and bottom. It also has a spoiler, a windshield, a big lightbar with two additional, smaller taillights at the back, and two vintage headlights. Despite its size, the Hovercar only has two seats, with the steering wheel being on the left-hand side. The steering wheel itself resembles the yoke of an airplane, hinting at the fact that this vehicle is also capable of flight (despite it only being able to hover and not fly in-game).

This vehicle is possibly inspired by the flying cars often found in 1960s art depicting the future. 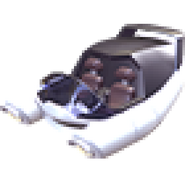 The Hovercar in a player's inventory. 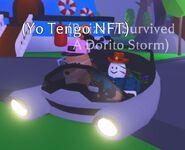 A player riding the Hovercar.

The Hovercar during the day.

The Hovercar at night.
Community content is available under CC-BY-SA unless otherwise noted.
Advertisement