Adopt Me! Wiki
Register
Don't have an account?
Sign In
Advertisement
in: Vehicles, Gifts, Legendary Vehicles,
and 7 more

View source
watch 02:53
GTA: The Criminal Enterprises - The Loop
Do you like this video?
Play Sound
Not to be confused with Heart Hoverboard.

The Hoverboard is a legendary single-seater vehicle in Adopt Me! that was previously available in an old gifts rotation. It costed

Like all other temporary Gifts Display legendary vehicles, it was only available for one week at a time, and if a player did not purchase it before the deadline, they had to wait until it became available as a prize again. Previously, it was on rotation with the Choo Choo Train and the Banana Car.

As of the 2021 Gift Refresh update, the Hoverboard was replaced with another rotation of legendary vehicles. It can now only be obtained through trading with other players.

The Hoverboard is a futuristic-looking vehicle that has the ability to levitate off the ground with the help of two blue flames originating from two exhausts located on the bottom of the Hoverboard. It is reminiscent of a floating skateboard without wheels, however, it is slightly faster than any skateboard.

The Hoverboard is mostly beige, with two pieces of black trim wrapped near the edges of the vehicle. In contrast, the bottom of the vehicle is mostly black, with two of what appear to be blue exhausts on either side, with flames always shooting through them. The middle also has a glowing blue line going through it, which has the same exact color as the two exhausts. The Hoverboard's blue flames light up at night in a manner similar to the Ice Queen Sleigh's lantern.

It is most likely based on the Hoverboard from the Back to The Future series, especially the bottom part of the vehicle.

The Hoverboard is a quick, agile, and maneuverable vehicle that is useful for long trips across the map. It can also be used over water surfaces, unlike other vehicles. If the player is traveling with a pet, however, it is advised that they use a leash or hold it (if they are an adult), as pets can often struggle to keep up and get stuck as a result of the Hoverboard's speed. The Hoverboard can also get stuck and get trapped in the tunnel while traveling between the Neighborhood and Adoption Island. 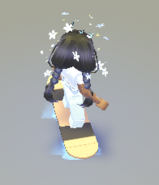 A player riding the Hoverboard.

The Hoverboard during the day.

The Hoverboard at night.
Community content is available under CC-BY-SA unless otherwise noted.
Advertisement