Managing the Pet Egg Shop in the Nursery.

Holly is one of the four NPCs in the Nursery in Adopt Me!. She sells the Pet Egg for

600. If a player interacts with her, she yells in capital letters about her love for cats. The other NPCs are Sir Woofington, who sells Royal Eggs, and Doug, who sells Cracked Eggs.

Holly wears a newspaper hat over her brown hair. She wears glasses and has blue eyes. Holly’s hoodie features a tabby cat on a pink and white background. She also wears blue pants that has two white drawstrings. She also has a black and white cat that wears a tuxedo perched on her shoulder.

This is what Holly says when a player interacts with her: 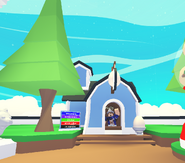 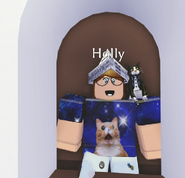