Adopt Me! Wiki
Register
Don't have an account?
Sign In
Advertisement
in: Pets, Ultra Rare, Ultra-Rare Pets,
and 8 more

The Hedgehog (formerly known as the Elf Hedgehog) is a limited ultra-rare pet added into Adopt Me! during the Christmas Event (2019). Elf Hedgehogs could be bought for

80,500; however, now that Elf Hedgehogs are not obtainable to purchase, players can only obtain them through trading.

In the Dress Your Pets Update on April 11, 2020, Elf Hedgehogs were renamed as "Hedgehog" and the Elf Hat was added to the owner's inventory, allowing players to trade the hat separately.

The Hedgehog has brown spikes covering most of its back and head; it has beige fur, beige feet, two black eyes, a round dark brown nose, and circular brown ears with dark beige insides.

Listed below are the tricks the Hedgehog learns in order:

The Neon Hedgehog glows a pale pink inside its ears, on its nose, and on its feet. Before the update, the gold bell on its hat glowed bright yellow.

The Mega Neon Hedgehog glows in the same places as the Neon Hedgehog, except these areas cycle through the colors of the rainbow. 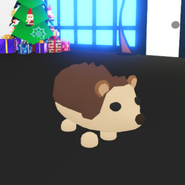 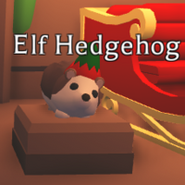 The Elf Hedgehog displayed in the Christmas Shop. 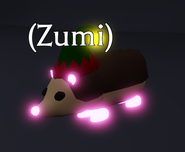 A Neon Elf Hedgehog before the Dress Your Pets Update. 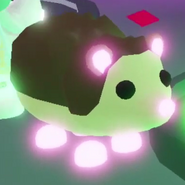 The Elf Hedgehog on the Elf Pets Thumbnail.