Adopt Me! Wiki
Register
Don't have an account?
Sign In
Advertisement
in: Potions, Limited, Unavailable,
and 7 more

The Heart Potion is an uncommon limited potion in Adopt Me! that was obtainable during the 2019 Valentine's Event for

15. This potion, when consumed by the player, allows pink hearts to surround the player until they leave the game or reset their character.

This potion goes under the food section of a player's inventory and is now unobtainable unless through trading.

The Heart Potion features a pink potion in a clear, heart-shaped bottle with a black cap. When consumed, mini hearts will surround the player. 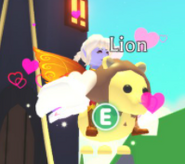 A player after drinking the Heart Potion.
Community content is available under CC-BY-SA unless otherwise noted.
Advertisement