Adopt Me! Wiki
Register
Don't have an account?
Sign In
Advertisement
in: Events, Halloween, Halloween Event (2021),
and 4 more

The Halloween Event (2021) was an Adopt Me! event. The fall map came out on October 14, 2021, at 3:00 PM UTC, but the Halloween event was released on October 28, 2021. Before the event's arrival, there was a countdown that players could see on the left side of their screen, indicating the number of days before its release.

There was also a countdown to the end of the Halloween event. When a player clicked on the Halloween symbol on the left side of the screen, it asked them if they would like to teleport to the Crypt. When they got there, it teleported them to a place where they would have to swim through a hole to get to the main event. Or, they could go backward, and it would teleport them to a place where they could either leave the main event or go left to go to the shop. There were two minigames that players could choose from; the Headless Horseman race or the Potion Hunt.

Minigames were ways for players to earn

Candy. There were 2 minigames in this event.

In the "Horseman Chase" minigame, players were given a moped that appears to be the Halloween Black Ponycycle. Players were given 2 minutes and 30 seconds to drive around Adoption Island, and their task was to collect the candy corn along the way; each candy corn gave 100 points. If a player was not in the game, the circle that they entered to join the game was red. The red circle became green when a player was in the game. It became purple when the game was in progress. It was still red if the game had started and they were not in it.

If players did not catch the Headless Horseman before the time ran out, only 6 candies were given for every 100 points. If a player wanted to play the same game again without completing any other minigames (Potion Hunt) in between, it took 17:30 minutes until it started again.

The potions given were removed from the player's inventory after the Halloween Event (2021) ended, even if the player had not consumed them.

Ingredients were the elements of the potion. A total of 7 ingredients could be found, but only 3 could appear and be interacted with per minigame. The ingredients consisted of 5 mushrooms and 2 plants, the locations of which are listed below:

The Black Fern was located behind the statue of Jesse.

The White Fern was located near the entrance of the Crypt.

The Tall Glow Mushroom was located right where the waterfall meets the pond.

The Small Mushroom was located in cell room #2, to the right of the caved-on wall.

The Big Mushroom was located in the hanging cage inside cell room #6.

The Tall Mushroom was located in cell room #1.

The Half Glow Mushroom was located next to the minigame's glowing ring. 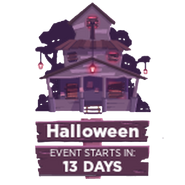 The 2021 Halloween Event countdown icon as seen on a player's screen.

The 2021 Halloween Event cemetery located near the Campsite.

A teaser image for the Halloween Event (2021) from Adopt Me!’s Twitter. 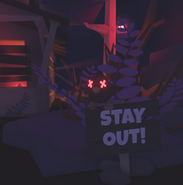 The pumpkin icon right after you claim your candy.

The countdown icon with no text.
Community content is available under CC-BY-SA unless otherwise noted.
Advertisement