Adopt Me! Wiki
Register
Don't have an account?
Sign In
Advertisement
in: Halloween Event (2019), Events, Halloween,
and 10 more

The 2019 Halloween Event was an event in Adopt Me! that lasted from October 18, 2019, to November 1, 2019, and had activities and items available during the event. These items are now only obtainable through trading.

The event currency was

Candy, which could be earned by participating in the activities below or buying them with

Robux and could be spent on exclusive items at the Candy Trading Shop.

The events took place next to the obby rooms, which were near the Playground. The developers removed the items on the Playground and designed a new park, where one of the mini-games took place. The second special area was the School, which turned into a Haunted House. The inside had twists and turns, shortcuts, and traps where people would fall.

40 was replenished and randomly scattered throughout Adoption Island, encouraging the players to find them. A Candy could appear as a candy corn, a bat cracker, or a lollipop. Candies could also be bought with

Each Candy found in the Candy Hunt was worth

30. The maximum amount of Candies that could be earned from this activity was

Every time the Haunted House ailment arose (a replacement of the School ailment), five ghosts appeared randomly and were scattered in the Haunted House (in place of School). Players had to catch them, with each catch earning

The player would enter the main area by going down the left passageway until they encountered a giant pit and three rooms, which could be traveled to by walking down thin tightropes. Falling down the pit would land the player in a spike trap, and the player would have to climb up to the main area. A ghost could be found either in the room before the main area, icicle room, room with three doors, room with skeleton bathing, skeleton dungeon, library, or a hallway with a treasure chest. There was an invisible pit in the entrance which the player could fall into.

Every time the Graveyard Ailment arose (a replacement of the Bored ailment), the Graveyard (in place of Playground) opened to a minigame for the player to try and win Candies from.

The player started by approaching the Graveyard, in which two ghosts (increases by one every trial if all Candies were not dug up, decreases by one to a minimum of two if all Candies are dug up this trial) would come out and enter a randomly selected grave. The player must then memorize the ghosts' locations and begin knocking on tombstones. Knocking on a tombstone of an unoccupied grave would earn

500. Knocking on a tombstone of a grave occupied by a ghost would suddenly reveal the occupied graves and end the trial.

The player had three trials, each Graveyard opening. If they used up all of their trials, they could either pay

15 for another three trials or wait for the next opening. 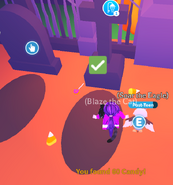 Digging Candy from a grave. 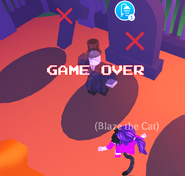 Disturbing a ghost from its grave.

Exchange rate of Robux to Candy.

All items exclusive to the Halloween Event (2019) were bought from the Candy Trading Shop.