Adopt Me! Wiki
Register
Don't have an account?
Sign In
Advertisement
in: Pet Shop, Pets, Legendary,
and 8 more

The Griffin is a legendary pet in Adopt Me! which could be bought as a gamepass in the Pet Shop for

600. After purchasing the gamepass, players could find it in their inventory. The Griffin is now only obtainable through trading, as it left the game on January 6, 2022, at 4:00 UTC.

The Griffin has a mostly white head, with large gray bushy eyebrows and black beady eyes. It also has a yellow beak and feet, dark brown wings with white edges, and a light brown body.

Listed below are the tricks the Griffin learns in order:

The Mega Neon Griffin cycles through the colors of the rainbow on the same areas as the Neon Griffin. 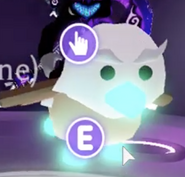 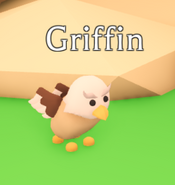 The Griffin on display in the Pet Shop. 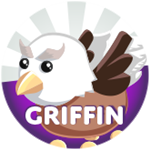