Adopt Me! Wiki
Register
Don't have an account?
Sign In
Advertisement
in: Halloween Event (2019), Shops, Events,
and 2 more

The Graveyard was a temporary building in Adopt Me! which replaced the Playground during Halloween Event (2019). The Graveyard stars an event known as Knock the Gravestone, along with an Orange Ailment titled "Graveyard." The Graveyard also contains the entrance to the Candy Trading Shop.

Every so often, paired with the orange ailment "Graveyard," the players' attempts for a minigame labeled Knock the Gravestone are reset. The minigame is quite simple: 2-4 ghosts will spawn in and travel to a gravestone before disappearing inside of it. The goal is to interact with all of the gravestones without ghosts inside of them. Each gravestone gives

500, the exclusive Halloween currency. The player has 3 attempts. To replenish attempts, either purchase 3 more for

15 or wait for the Graveyard ailment to appear again.

The Candy Trading Shop is a Halloween 2019 event-exclusive area with the Graveyard. The player can teleport to the shop using the "Halloween Event" button on the left of the screen below the chat. 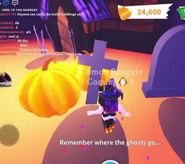 A player in the Graveyard.