The Golden Walrus is a limited legendary pet in Adopt Me! that was released on December 1, 2021 during the Winter Holiday (2021). As the event has ended, it can now only be obtained by trading or by opening any remaining Walrus Boxes.

The Golden Walrus features a golden body with two flippers on its side and one hind flipper. It has two beady black eyes, black whiskers, two white tusks, black nostrils and a white snout. It appears to be holding a scepter in its right front flipper, which is a part of the pet, not a removable pet accessory. It is otherwise a recolor of the Walrus.

These are the tricks the Golden Walrus learns in order:

Like other Walruses, the Neon Golden Walrus glows blue on its tusks, whiskers, and freckles. 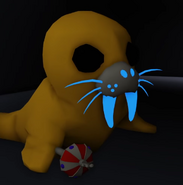 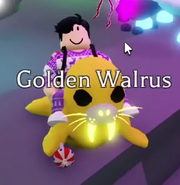