watch 02:48
Wiki Targeted (Games)
Do you like this video?
Play Sound

The Golden Rat is a limited legendary pet in Adopt Me! that was part of the 2020 Lunar New Year Event. Players could purchase Rat Boxes for

The Golden Rat has white fur, golden inner ears, and a golden nose. It also has beady black eyes and a golden tail. It is a recolor of the Rat.

Here are the tricks the Golden Rat learns in order: 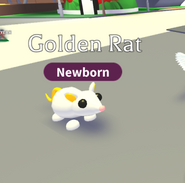 A Mega Neon Golden Rat.
Add a photo to this gallery
Retrieved from "https://adoptme.fandom.com/wiki/Golden_Rat?oldid=304909"
Community content is available under CC-BY-SA unless otherwise noted.