Adopt Me! Wiki
Register
Don't have an account?
Sign In
Advertisement
in: Pets, Interactable, Farm Shop Event (2021),
and 6 more

The Golden Ladybug is a legendary pet that was released to Adopt Me! along with the Farm Shop Event (2021), on February 18, 2021. It can be tamed by buying Diamond Lavender for

199 or through trading. There is a 4 in 40 chance (10%) of obtaining a Golden Ladybug from the Diamond Lavender.

The Golden Ladybug features a yellow round body with golden dot shaped spots on it and a circle like head. It also has two silver antennae, white wings, six feet, and large black beady eyes.

Here are the tricks the Golden Ladybug learns in order:

The Neon Golden Ladybug glows a golden color on its spots, antennae, and feet.

A Neon Golden Ladybug in the day.

A Neon Golden Ladybug at night. 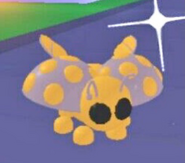