Adopt Me! Wiki
Register
Don't have an account?
Sign In
Advertisement
in: Pets, Ultra-Rare Pets, Ultra Rare,
and 8 more

The Goat is a limited ultra-rare pet in Adopt Me! that was released on June 9, 2022. It cost

249 and could be purchased in front of the Nursery. It was only available for one week, and was removed from the game on June 16, 2022. It can now be only obtained through trading.

The Goat has a white body, two small horns, two beady black eyes, and a pink nose. It has pointed ears with pink insides. On its chin, it has a small white beard; this beard shakes slightly when the Goat moves.

Listed below are the tricks the Goat learns in order:

The Neon Goat glows pink on its horns, ears, beard, and feet.

The Mega Neon Goat glows in the same areas as the Neon Goat, except those areas cycle through the colors of the rainbow.

The Goat on Adopt Me!'s thumbnail. 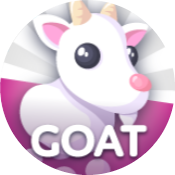 The Goat on display. 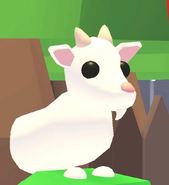 A teaser image of the Goat. 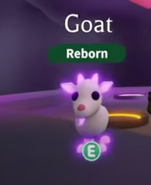 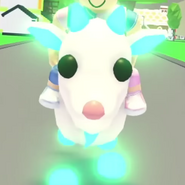 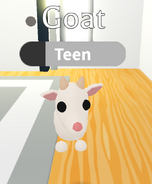 A Goat in-game.
Community content is available under CC-BY-SA unless otherwise noted.
Advertisement