Adopt Me! Wiki
Register
Don't have an account?
Sign In
Advertisement
in: Pets, Fossil Egg Pets, Uncommon,
and 6 more

The Glyptodon is a limited uncommon pet, which was released in Adopt Me! on October 10, 2020. Its release was confirmed in the Fossil Isle Excavation Event, which started on October 2, 2020. As it is now unavailable, it can only be obtained by trading or hatching any remaining Fossil Eggs. Players have a 30% chance of hatching an uncommon pet from the Fossil Egg, but only a 10% chance of hatching a Glyptodon.

The Glyptodon features a pet that has a bright pink body with a white underbelly, feet, and tail. It also has tiny white ears and blue spots on the top of its head. Similarly, its shell is mainly bright pink with large, blue spots and a blue edge around the shell. There are white spikes on the shell's edge and the tail. It has black eyes on the sides of its head. When players hold the Glyptodon, it will draw its head into its shell and its face will be hidden unless the player zooms in.

Here are the tricks the Glyptodon learns in order:

The Neon Glyptodon glows light blue on the spots on its head and shell, the edge of its shell, tail, and feet. Its tongue glows as well, although it is not visible most of the time.

The Mega Neon Glyptodon glows in the same areas as the Neon Glyptodon, except these areas cycle through the colors of the rainbow. 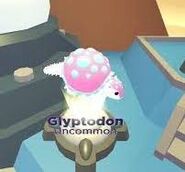 The Glyptodon on display in the Fossil Isle Excavation. 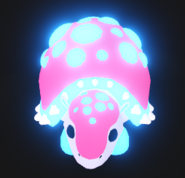