Adopt Me! Wiki
Register
Don't have an account?
Sign In
Advertisement
in: Toys, Uncommon, Fossil Isle Excavation,
and 7 more

View source
watch 02:53
GTA: The Criminal Enterprises - The Loop
Do you like this video?
Play Sound
Not to be confused with Glyptodon.

The Glyptoball is a limited uncommon toy in Adopt Me! that could have been obtained when digging for fossils at the Fossil Isle Excavation. To interact with this item, a player can click or press their screen to throw. When the item is thrown, a player's equipped pet will fetch and bring it back to the player. This item can now only be obtained through trading, as its respective event has ended.

The Glyptoball features a pink ball surrounded with a light blue ring; it has several light blue spots on its top. It resembles the Glyptodon's shell. The Glyptodon is a pet, found in the Fossil Egg, that was released on October 10, 2020. 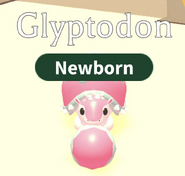 The Glyptodon holding a Glyptoball. 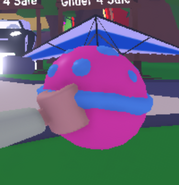 A player holding the Glyptoball.
Community content is available under CC-BY-SA unless otherwise noted.
Advertisement