Adopt Me! Wiki
Register
Don't have an account?
Sign In
Advertisement
in: Gamepass, Interactable, Robux,
and 7 more

The Glider is an ultra-rare gamepass toy in Adopt Me!. It could be obtained by purchasing the Glider Gamepass with

Robux from the display to the left of the main square. It can now only be obtained through trading.

Players are able to walk around normally while holding the Glider. however, it is possible to get stuck as the Glider can still collide with walls and other objects while in this state. The Glider cannot be used while in vehicles or in Obbies, but it can be used while riding a pet. Players can also hold pets whilst flying.

The Glider is very similar to the Propeller and it is known as being one of the only toys that have the ability to take flight and change directions during flight. The Glider is known to have the advantage of lateral movement.

Despite being categorized as a toy, the Glider's use is similar to that of a vehicle, with an ability to be used as transportation. The Glider has unique controls, with clicking used to take flight and is controlled by camera movements instead of the usual controls.

To use the Glider, the player would have to first equip it through the ‘Toys’ section of their inventory. After equipping it, the player would then click on the equipped item to take flight. The player can move their camera around to change the direction they glide. To stop gliding, the player can press the jump button at any time during the flight.

The Glider while in flight.

Holding a pet while flying with the Glider. Note the fact that the pet isn't actually being held, it is connected to the player instead.

A stationary player holding a Glider. 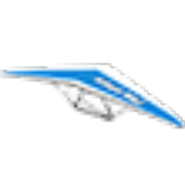 The Glider in a player’s inventory. 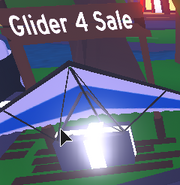 The Glider on display.
Community content is available under CC-BY-SA unless otherwise noted.
Advertisement