Adopt Me! Wiki
Register
Don't have an account?
Sign In
Advertisement
in: Pets, Eggs, Legendary,
and 6 more

The Giraffe is a limited legendary pet, which was added to Adopt Me! on July 5, 2019. As it is now unavailable, it can only be obtained by trading other players, or by hatching any remaining Safari Eggs. Players have a 3% chance of hatching a legendary from the Safari Egg.

The Giraffe has a long, bright yellow body with a pattern of dark, brown spots all over its body. It has two beady black eyes, four brown feet, and a brown tail. Its ears are yellow with pastel pink insides, and it has two little yellow ossicones between its ears.

Here are the tricks the Giraffe learns in order:

The Neon version of the Giraffe glows a pale yellow on its spots, hooves, and inner ears. 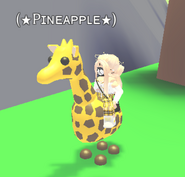 A player riding the Giraffe.

The Giraffe on Adopt Me!'s cover image for the Safari Egg update.

A Giraffe in-game.
Community content is available under CC-BY-SA unless otherwise noted.
Advertisement