Adopt Me! Wiki
Register
Don't have an account?
Sign In
Advertisement
in: Star Rewards, Pets, Ultra Rare,
and 2 more

The Ginger Cat, as true to its name, features a bright orange tabby cat topped with light brown stripes on both its head and back. It is quite plump in shape, with a lighter orange belly. It has beady black eyes, a small pink nose, triangular orange ears, orange paws, and black whiskers.

Listed below are the tricks the Ginger Cat learns in order are:

The Neon version of a Ginger Cat has its inner ears, nose, whiskers, paws, stripes, and tip of the tail glowing a very light yellow with a hint of orange.

The Mega Neon version of a Ginger Cat glows in the same areas as the Neon Ginger Cat, except that it cycles through the colors of the rainbow.

The Ginger Cat as it appears on the Star Rewards. 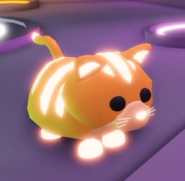