Adopt Me! Wiki
Register
Don't have an account?
Sign In
Advertisement
in: Pets, Gamepass, Gamepass Pet,
and 8 more

The Giant Blue Scarab is an ultra-rare pet in Adopt Me! that can be obtained through buying a Mud Ball for

199 or through trading. There is a 37.5% chance of obtaining a Giant Blue Scarab from the Mud Ball.

The Giant Blue Scarab is a scarab beetle with a black body. It has a blue head, two black antennae with golden tips, six legs, and a pair of beady black eyes. Underneath its blue wing casings are yellow flight wings.

Listed below are the tricks the Giant Blue Scarab learns in order:

The Neon Giant Blue Scarab glows blue on its head and wing casings. Its antennae glows yellow and the gap between the wing casings glow white. 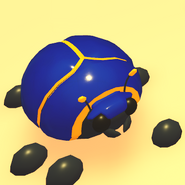