Adopt Me! Wiki
Register
Don't have an account?
Sign In
Advertisement
in: Pets, Halloween Event (2020), Halloween,
and 8 more

The Ghost Bunny is a limited ultra-rare pet from the Halloween Event (2020) in Adopt Me!. It cost

4,000 and could be bought from the Halloween Store during the event. Since the event has ended, the Ghost Bunny is only obtainable through trading.

The Ghost Bunny portrays a pastel blue-colored bunny that has long blue ears with light pastel insides, a baby blue stomach, a nose tip, and big black eyes. It is modeled after the ghosts seen in the mini-game Spirit Showdown. Although the Ghost Bunny shows up as gray in the inventory, when it is equipped by a player, it is baby blue. At night, the Ghost Bunny has a bright blue glow.

Here are the tricks the Ghost Bunny learns in order:

The Neon Ghost Bunny glows pastel purple on its chest, nose, inside the ears, and tail. 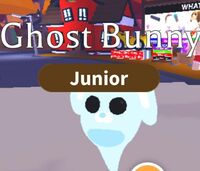 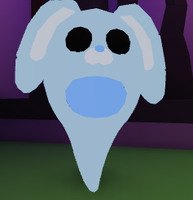 A Ghost Bunny as seen on display. 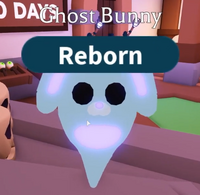 A Ghost Bunny in Spirit Showdown.
Community content is available under CC-BY-SA unless otherwise noted.
Advertisement