Adopt Me! Wiki
Register
Don't have an account?
Sign In
Advertisement
in: Pets, Gamepass, Gamepass Pet,
and 11 more

View source
watch 02:53
GTA: The Criminal Enterprises - The Loop
Do you like this video?
Play Sound
Not to be confused with Frost Fury (NPC).

The Frost Fury is a limited legendary pet in Adopt Me! that was introduced on December 15, 2020, during the Winter Holiday Event (2020). It was available for purchase during the event for

The Frost Fury features a long white wingless dragon with a light cyan underbelly. It slightly resembles the Frost Dragon in its color scheme, and the Dancing Dragon in its shape and model scheme. It has a short, blue crystal-like tail, four small white feet, and icicle-like spikes along its back. The head has two blue horns, two indigo ears, a dark blue nose, two blue eyebrows, and two small black eyes.

Here are the tricks the Frost Fury learns in order:

The Neon Frost Fury glows bright blue on its eyebrows, whiskers, horns, the spikes along its back, and the tip of its tail. 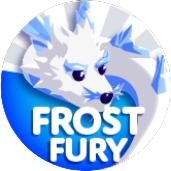 The Frost Fury Gamepass icon during the 2020 Winter Holiday Event. 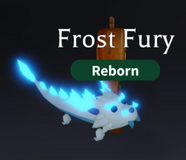