The Frog has green skin, beady black eyes, four green legs, and a pastel yellow underbelly. When the Frog moves, it produces a hopping animation.

Listed below are the tricks the Frog learns in order:

The Neon Frog shines a bright neon yellow on its underbelly.

The Mega Neon Frog's underbelly cycles through the colors of the rainbow, like many other Mega Neon pets. 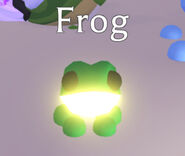