Can only be obtained via excavating or trading with other players.
The Forgotten Flower is a limited ultra-rare pet accessory in Adopt Me! which players could obtain through digging for fossils during the Fossil Isle Excavation Event. It can now only be obtained through trading, as its respective event has ended.

Upon discovering a fossil, players may take the said fossil to the NPC Henry, who will in turn give players some information regarding the fossil that they have discovered. After taking two fossils to Henry, he would reward the player with a Forgotten Flower since they would have uncovered all the ultra-rare pets.

The Forgotten Flower features four green leaves topped with a pink-red flower. It is placed on the side of a pet's head. It is based off of its real-life counterpart: the Scabiosa. 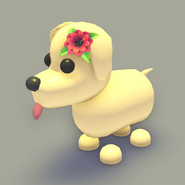 The Forgotten Flower as seen on a Dog.
Community content is available under CC-BY-SA unless otherwise noted.
Advertisement