Adopt Me! Wiki
Register
Don't have an account?
Sign In
Advertisement
in: Toys, Toy Shop, Bucks,
and 5 more

View source
watch 02:17
New Pokemon Games - The Loop
Do you like this video?
Play Sound
Not to be confused with Bunny Plush and Easter Bunny Plush.

The Floppy Bunny Plushie is a common toy in Adopt Me!. It can be purchased at the Toy Shop for

60. This plush tends to serve no purpose other than being an interactable item. To interact with the plush, simply click on the screen and the player will appear to hug this item.

Upon purchase, players are able to choose what color they want the plushie to be. However, this color cannot be changed later on or when the toy is traded.

The Floppy Bunny Plushie features a pink-colored plush bunny with round shaped head with large floppy ears, two black eyes, and a purple nose when viewed in a player's backpack. It looks the same when equipped except the body is the color the player chose. 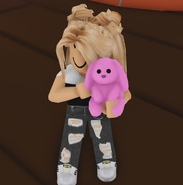 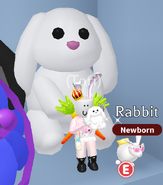 The Floppy Bunny Plushies on display.
Community content is available under CC-BY-SA unless otherwise noted.
Advertisement