Adopt Me! Wiki
Register
Don't have an account?
Sign In
Advertisement
in: Toys, Common, Common Toys,
and 10 more

The Figgy Pudding Chew Toy is a limited common toy in Adopt Me!. It could be bought during the Winter Holiday (2021) for

7,500. As the event has ended, it can now only be obtained by trading.

To interact with this item, a player can click/press their screen to throw the chew toy onto the ground, where an equipped pet would pick it up and chew it.

The Figgy Pudding Chew Toy features a brown pudding topped with white cream, placed on a thin red plate. There are multiple holly berries scattered across the pudding, along with small holly leaves. 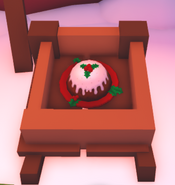 The Figgy Pudding Chew Toy on display at the Winter Market.
Community content is available under CC-BY-SA unless otherwise noted.
Advertisement