Adopt Me! Wiki
Register
Don't have an account?
Sign In
Advertisement
in: Limited, Unavailable, Unavailable Pets,
and 6 more

The Farm Egg is a limited legendary egg in Adopt Me!. It was released into the game on November 22, 2019, replacing the Jungle Egg, and was then replaced by the Aussie Egg on February 29, 2020. It cost

The Farm Egg is a white egg with black spots, small pink ears, and cream-colored horns. It is meant to represent the Cow's appearance with its two tiny horns, ears, and black and white spots.

The Farm Egg has a total of nine pets that can be hatched/obtained from it. They are the following: 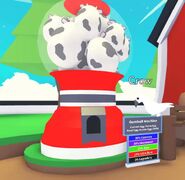 The Farm Eggs in the Gumball Machine.