Adopt Me! Wiki
Register
Don't have an account?
Sign In
Advertisement
in: Vehicle Dealership, Vehicles, Bucks,
and 2 more

The Family Car is an uncommon four-seater vehicle in Adopt Me! that was added to the game on March 31, 2022. It can be purchased for

900 in the Vehicle Dealership. It can also be obtained through trading. It can seat four players at a time, including the driver.

The Family Car features the appearance of a common coupe; it has two wing mirrors, a trapezoid-shaped grille, and two glowing yellow lights at its front.

It bears a similar appearance to the Car. However, the Car's surface is less smooth than the Family Car. The Car also has less details in its grille and lights, with no wing mirrors. 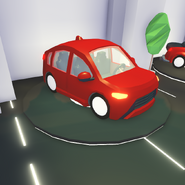 The Family Car on display.

A player driving the Family Car.
Community content is available under CC-BY-SA unless otherwise noted.
Advertisement