Adopt Me! Wiki
Register
Don't have an account?
Sign In
Advertisement
in: Pet Accessories, Christmas, Christmas Items,
and 8 more

N/A
The Elf Hat is a limited rare pet accessory. Players that have previously owned the Elf Hedgehog or Elf Shrew (now known as Hedgehog and Shrew) will be given this accessory for free.

The only ways to obtain this hat is if an Elf Hedgehog or Elf Shrew was previously owned, or through trading.

It is the same hat that an Elf Shrew (now Shrew) and Elf Hedgehog (now Hedgehog) wore before the Dress your Pets update in Adopt Me!. Its bottom is red while the rest of the hat is green. The yellow bell sticks at the top of the hat. 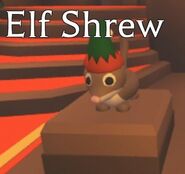 A Shrew wearing an Elf Hat. 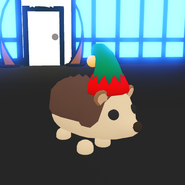 A Hedgehog wearing an Elf Hat.

A player holding an Elf Hat.

The Elf Hat in a player's inventory.
Community content is available under CC-BY-SA unless otherwise noted.
Advertisement