The Dragon is one of the non-limited legendary pets in Adopt Me!. Players can obtain it by hatching a Retired Egg or through trading.

The Dragon has red skin, a beige underbelly, and two wings; on each wing, there is a red spur with three beige colored wing membranes.

Here are the tricks the Dragon can learn in order:

The Mega Neon Dragon glows in the same areas as the Neon version, except the areas cycle through the colors of the rainbow. 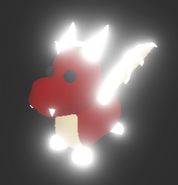