Adopt Me! Wiki
Register
Don't have an account?
Sign In
Advertisement
in: Legendary Vehicles, Vehicles, Gamepass,
and 7 more

View source
watch 02:34
Fire Emblem Warriors: Three Hopes - The Loop
Do you like this video?
Play Sound
Not to be confused with Doug.

The Douglas is a two-seated legendary vehicle in Adopt Me! that was obtainable in the Supercars Pack, which costed

1000. It can now only be obtained through trading as the Supercars Pack was removed from the game.

The only way to obtain the Douglas other than trading was by purchasing the Supercars pack, which means it came bundled with Tiffany and the Axel. There was no way to purchase the Douglas as a standalone vehicle.

The Douglas, being a supercar, has impressive acceleration and speed. This however is largely contrasted to its very poor handling. The Douglas is comparable to the GoKart in terms of use, as both can reach really fast speeds but have poor handling. In terms of usability, the Douglas is more efficient than the GoKart due to it having a passenger seat. The Douglas' speed and handling also match with the other two supercars', as the supercars are in fact mere reskins of each other and do not have any distinguishing features other than their name and appearance.

The Douglas is an orange supercar with white windows, black tires, white headlights, a color-matching spoiler, white rims, and a lip splitter. The car is based on the Mclaren P1 LM.

A player driving the Douglas. 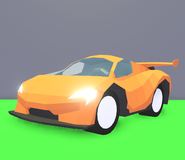 The Douglas as seen at night.
Community content is available under CC-BY-SA unless otherwise noted.
Advertisement