Adopt Me! Wiki
Register
Don't have an account?
Sign In
Advertisement
in: Toys, Rare, Gifts,
and 9 more

The Donut Flying Disc (formerly known as Donut Frisbee) is a rare toy in Adopt Me! that was obtainable during an old gifts rotation. As the Gifts were replaced with new items, it is now only obtainable through trading. Similar to other flying discs, when thrown to any equipped pet, it will chase after the flying disc and bring it back to its owner. 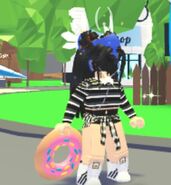