Adopt Me! Wiki
Register
Don't have an account?
Sign In
Advertisement
in: Vehicles, Legendary Vehicles, Gifts,
and 8 more

View source
watch 02:53
GTA: The Criminal Enterprises - The Loop
Do you like this video?
Play Sound
Not to be confused with Donut Unicycle.

The Donut Cycle is a limited legendary single-seater vehicle in Adopt Me! which used to be available as a prize from an old gift rotation in the 2019 Santa's Gift Display. It is now only obtainable through trading.

The Donut Cycle is a bright pink monocycle with a white inner wheel, pink steering wheel, and donut-shaped seating. It is similar to its counterpart, the Monocycle, with the only differences being the color and the seat. While the Monocycle has an engine, the Donut Cycle has a seat shaped like a pink frosted donut.

The Donut Cycle is a donut-themed version of the Monocycle and behaves as such. The Donut Cycle drives at a reasonably fast rate with an incredibly sharp turning radius and can prove to be a capable transporter despite its single-seat limitation. 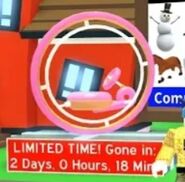 The Donut Cycle at the Gift Display.

A player riding the Donut Cycle.
Community content is available under CC-BY-SA unless otherwise noted.
Advertisement