Adopt Me! Wiki
Register
Don't have an account?
Sign In
Advertisement
in: Food, Interactable, Bucks,
and 2 more

The Donut is a non-limited common food item in Adopt Me! which is consumable by parents, babies, and pets. It takes 3 bites for a parent/baby to finish a donut and can fulfill the 'Hunger' ailment.

Donuts can be bought in the furniture catalog in houses for

45. Once purchased and placed, players can collect an unlimited amount of Donuts from the platter. It disappears from the player's inventory after the player leaves the game.

The Donut features beige-colored rings on a yellow-white platter.

Additionally, players can also buy icing extensions for Donuts in the furniture catalog. Once equipped, they can interact with any of the three placed extensions as 'icing' for the top of their Donut. The icing comes in the colors of white, pink, and dark brown; presumably the flavors vanilla, strawberry, and chocolate. 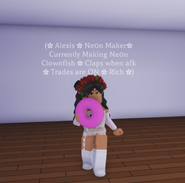 A player holding a Donut with Strawberry Icing. 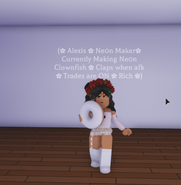 A player holding a Donut with Vanilla Icing.

A player holding a Donut with Chocolate Icing.
Community content is available under CC-BY-SA unless otherwise noted.
Advertisement