The Dolphin has a blue body with a light-blue underbelly with a small blowhole on top. It has two fins, one dorsal fin on the top, and tail fins on its back. It has two beady black eyes.

Here are the tricks the Dolphin learns in order:

The Neon form of the Dolphin glows pink on its underbelly as well as underneath its tail.

The Mega Neon form of the Dolphin glows in a rainbow cycle on its underbelly as well as underneath its tail. 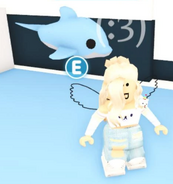