Adopt Me! Wiki
Register
Don't have an account?
Sign In
Advertisement
in: Vehicles, Limited, Unavailable,
and 6 more

The Dogmobile is a legendary three-seater vehicle that was obtainable as a prize in the Gift Display. It cost

499 in the respective gifts. It is no longer in the gifts rotation and is now only available through trading.

The Dogmobile is a rather long vehicle, and its handling and speed reflect that. It cruises gently along the road and is mostly unbothered by most bumps; its turning is just as gentle. Its shape also makes it difficult to flip over, compared to the Banana Car. The Dogmobile has the tendency to fling players in the air when crashing into them, much like the Traveling House.

The front of the Dogmobile features a light-brown dog/dachshund with a red tongue sticking out. The vehicle is very long, and ends with a small pointed tail. The dog's face at the front of the vehicle is similar to the in-game Dog and all the other dog-themed items. The Dogmobile has a rather basic design, lacking headlights, seats, and a steering wheel. 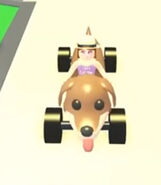 A player riding a Dogmobile.
Community content is available under CC-BY-SA unless otherwise noted.
Advertisement